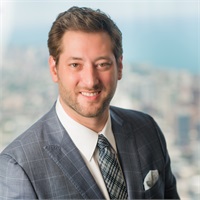 Less than 18 months after opening the doors to Altman Advisors, the visionary CEO, Ben Altman determined the direction and set the pace for his dedicated team to raise an unprecedented $250,000,000 in advisory assets. On July 15th, 2016, Ben founded Altman Advisors with his father Shelly. They grew 38% in assets under management their first calendar year, twice the industry average, according to FA Insight TD Ameritrade Institutional Benchmarking.

To accomplish this goal, Ben combined two value added disciplines in a forward-thinking fiduciary model: financial planning and discretionary portfolio management. This means Altman Advisors trades on behalf of their clients as if it were their own money, but even better. They are obligated to put your assets before their own! This is known as the Fiduciary Standard and Altman Advisors stands alone.

To understand how Ben arrived to where he is today, you have to go to his beginning.  Ben joined Shelly at UBS shortly after his graduation from Tufts University. His entry to the investment world was shaped by the worst recession and job market since 1981. The roaring 20-year Bull market ended with a bang: The internet bubble, 9/11, and subsequent recession became Ben’s introduction to the market. As a result, Ben’s mission was to determine how to avoid the 50-60% investment losses Americans had just incurred and to prepare clients for the next crash.

At the University of Chicago's Business School, Shelly learned to define, understand, and control risk using the Markowitz Modern Portfolio Theory. At the Wharton School he became a Certified Investment Manager Analyst™ (CIMA®) and adopted the Efficient Frontier, which uses statistical measures to manage any asset class. Ben found the most effective approach was based on Shelly’s teachings; namely, the CIMA® formulas and the Efficient Frontier.

Analyzing risk, Ben learned an important lesson: 91% of the predictability of returns comes from asset allocation, or how the account is diversified. Diversification cuts risk by combining things that are different. Ben then studied what did well in the previous crash: commodities and other real assets, domestic and international bonds, value investing and alternative investments. He built five models, using the Efficient Frontier, to give clients tools to prepare for the next storm. Once the models were built and applied to every client’s portfolio (profiling each client for their appropriate risk level), his father encouraged him to take post-grad coursework at Northwestern University to become a Certified Financial Planner™ (CFP®). With this training, Ben created individual financial plans for every client. Altman Advisors added a financial planning process before it was commonplace to do so, helping clients solve problems and focus on what is most important to them.

Then the next crash hit! Lehman Brothers, an iconic Investment Bank, collapsed. The bond holders of General Motors were  wiped out to save pensioners.  Americans lost faith in bonds which were in portfolios to protect stocks.  Everyone panicked, and the market again fell 50-60%.  This tested Ben’s models, and the models worked. The Conservative Model was only affected a fraction of what happened to the market and others did what they were expected to do. The stock market crash was called “the great recession”, and the bond market was priced for “the great depression.”  Bonds had yields to maturity of 10% to 17% per year, and Ben became an opportunistic and successful bond trader.  A few years later, the UBS' Bonds desk showed up at Ben's office unannounced. They wanted to know who Ben was, how he did it, and told him he was “ahead of the curve" because he was buying names on UBS Pick List before they recommended them! Ben continued to deliver excess returns with bonds over the next decade. Altman Advisors has established an impressive track record with bonds while the Index has returned nothing, time testing his discipline once again.

After becoming an experienced bond manager, he learned to manage equities from his father. When he thought he might have learned it all about portfolio management, Shelly reintroduced Options to the practice.  Since then, it has become one of Ben's favorite assets to trade, and another differentiator for Altman Advisors. Now, as Chief Compliance Officer of Altman Advisors, and after 15 years in his role, Ben feels comfortable as a master in the "craft" of helping clients achieve and maintain individual financial needs and goals.

Always remember, past performance does not ensure future returns.